RUNDERDOG I have a bone to pick. No, really I do.

Where I Don’t Want To Go For Summer Vacation 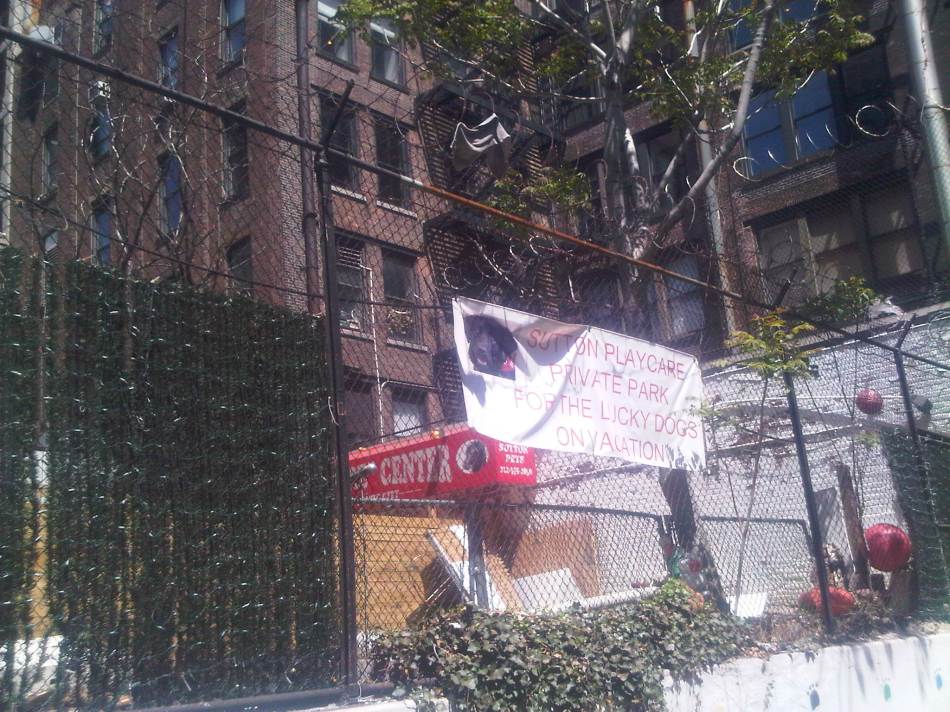 I’m sure this doggie day care place is fine and all on the inside. But boy does it not look like doggie penitentiary from the outside? With all the concertina wire around the top of the fence, I would not consider myself one of the “lucky dogs on vacation” if I stayed here. And does the dog on the sign not look like he wants desperately to be taken away from here? “Please, I’m innocent I tell ya,” his face seems to say.

It looks like someone threw a towel up on top of the barbed wire in an attempt to escape. I am picturing a Bulldog lifting weights back here. Maybe a couple of Boxers trading smokes. A Pug running around as the prison bitch (meaning female dog, of course).

Seeing places like this makes me want to be a better dog. Talk about your negative motivation. 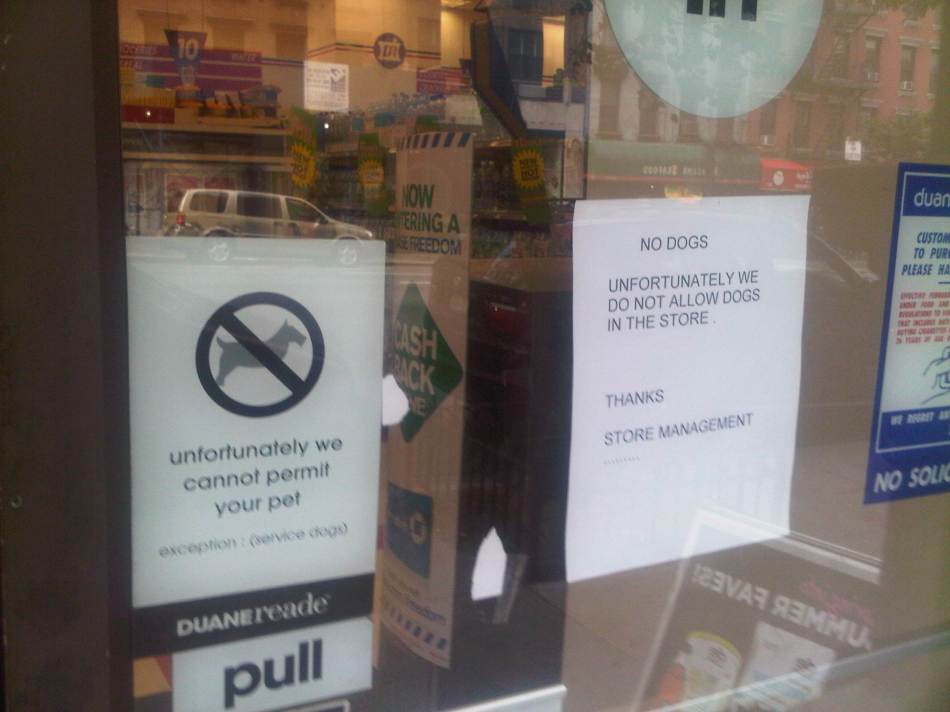 Apparently DUANEreade wants to make it clear that they don’t want dogs in the store. They’ve put up two signs to tell us that. And I think it’s because the sign on the left, the “official” one, just doesn’t make sense. I’m not sure, but is that a picture of a dog, or a seahorse? I’m going to guess it’s a dog-sea horse combo. Of course, you’re not going to let a dog-seahorse into the store. If that were the case, someone would be holding a dead one, or a nearly dead and flopping around one, in his hand. Or perhaps they would be carrying a large saltwater aquarium into the store, and then they would go to the back and ask the pharmacist to watch the dog-seahorse while they find Robutussin.

And you’re not allowed to “permit” me? As in I’m going to come in ask, “Do you have a permit for me, kind sirs?” No? And now you are kicking me out? Not only will you not permit me, but you’re also telling me to go? And why can’t you give me a “permit”? Why? You can give that “service dog” over there one, but not me? Why not? Where are you taking me? I’d like to buy something. These cookies right here. At least let me eat them.

So, yeah, I’m confused. At the bottom of the sign it says “Exception: (service dogs)”. First of all, a word about the parenthesis. Are service dogs so delicate you need to place them under the care of parenthesis? I say they can take care of themselves without the loving arms of parenthesis. Oh I get it. By giving them parenthesis, you’re giving them a special force field to enter the store. And why an exception for these (service dogs)? Don’t get me wrong. I mean I appreciate (service dogs). They do great things like help blind people. But I’m a service dog (No, I don’t need the parenthesis, thank you very much), too. Yes, a service dog, so to speak. I fetch things. I provide the service of entertainment. And the service of barking to alert my owner when I don’t like the way something looks. And I give my owners, and the dog runner, stuff to clean up–that’s a service you won’t find anywhere else. So, I’m allowed in?

“NO, I don’t think so!” says the second sign on the right. The sign of all signs. The sign to clear everything up. So you do not “allow” dogs, huh? So, what if the person I’m with “allows” me? Would that work? No? Does this sign mean service dogs are no longer allowed, as well? What about dog-seahorses? 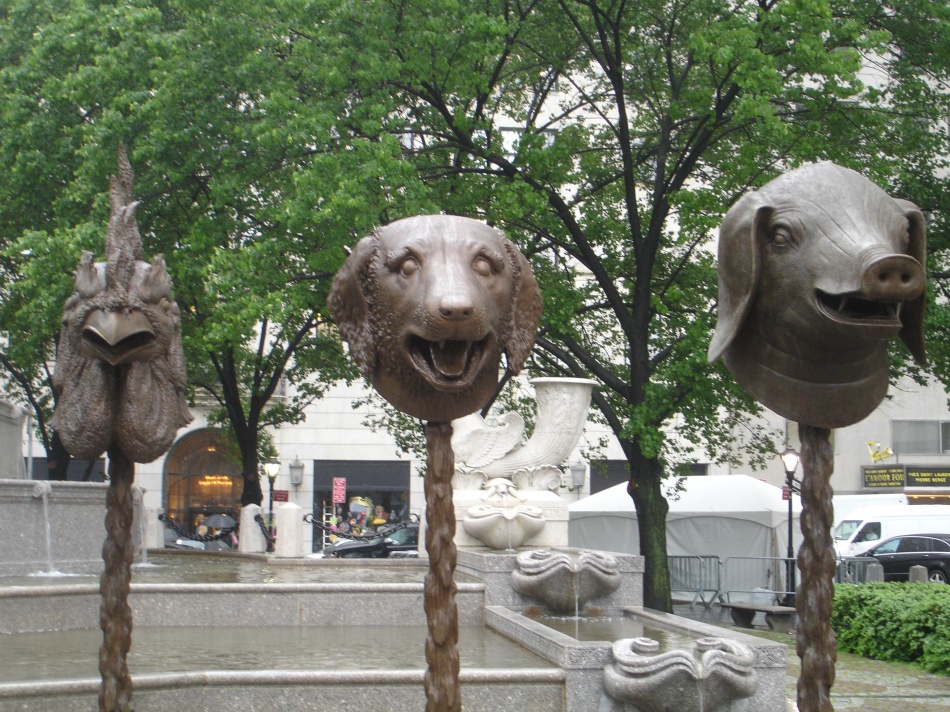 It’s gonna be okay. You’ll be okay. Take a look at this dog. Even though his head is on a stick, he’s still smiling. So when you find yourself in a bad spot just think of Spot here and know it could be much worse. He looks happy. And he’s stuck between a cock and a lard face. I know. Terrible play on words. But it made you smile. Or you cringed or winced and that could be interpreted as a smile. So smile. Until it gets better. Smile with your tongue even. See Spot. See Spot smile. See Spot smile with his tongue. 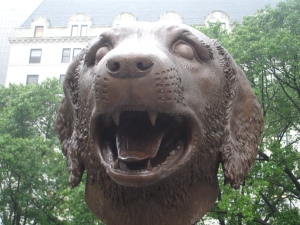 Try harder. Use the tongue. Smile like this guy: 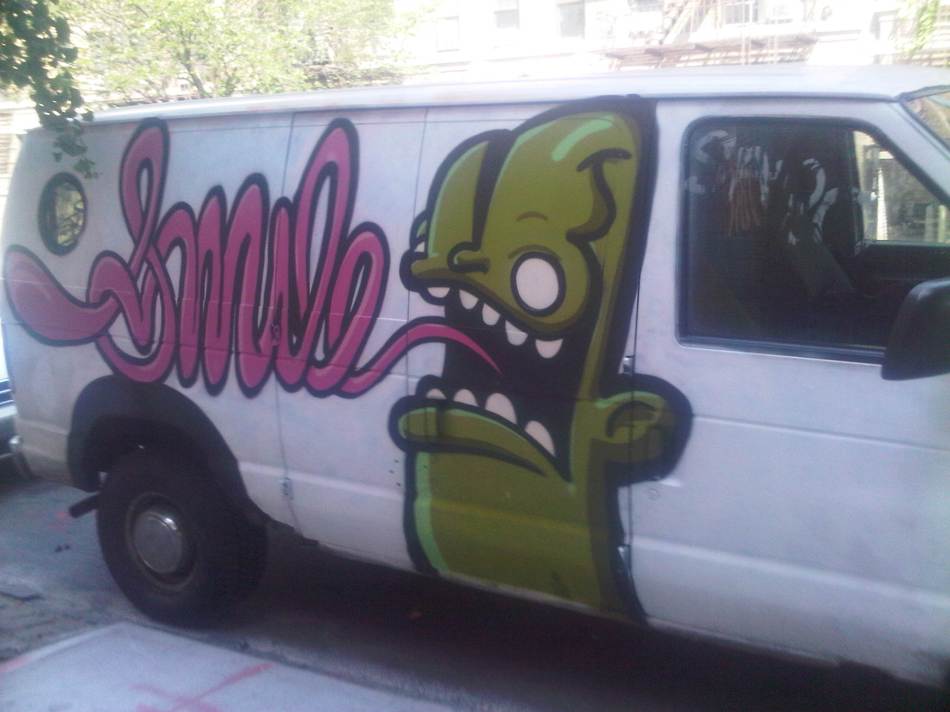 I Had A Nightmare

I had a nightmare that all the cats I harassed had ganged up on me. But they weren’t attacking me. They were killing me with kindness. Waving and saying hello or meow or whatever they say. And to add insult to injury some of them were holding happy birds which I’ve also harassed in the past. It looked something like this: 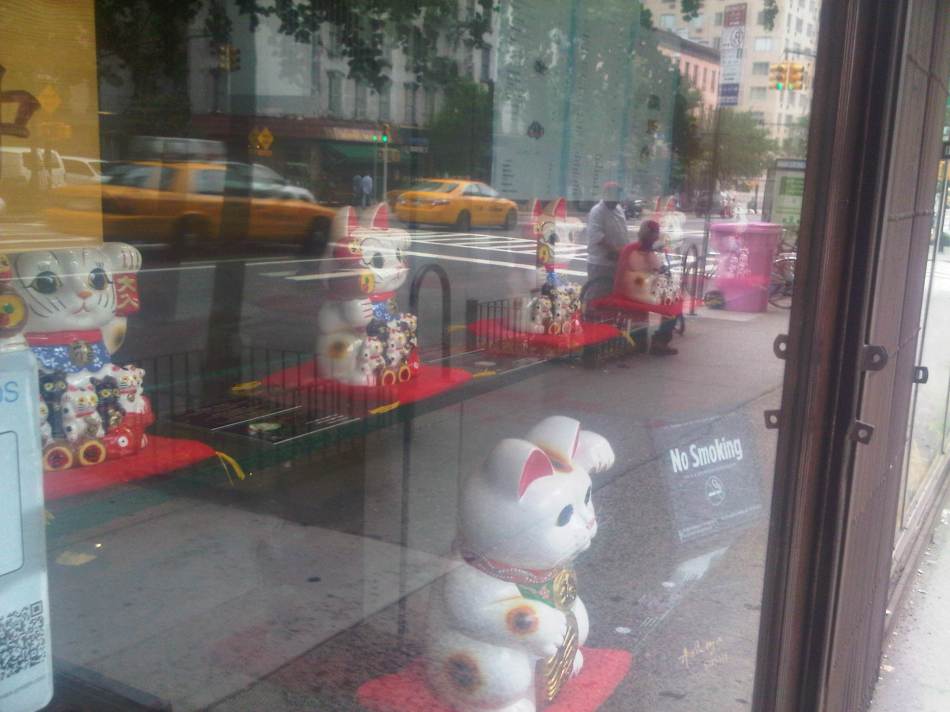 Found in a cave in Austin, Texas, this is an early drawing of a dog running: 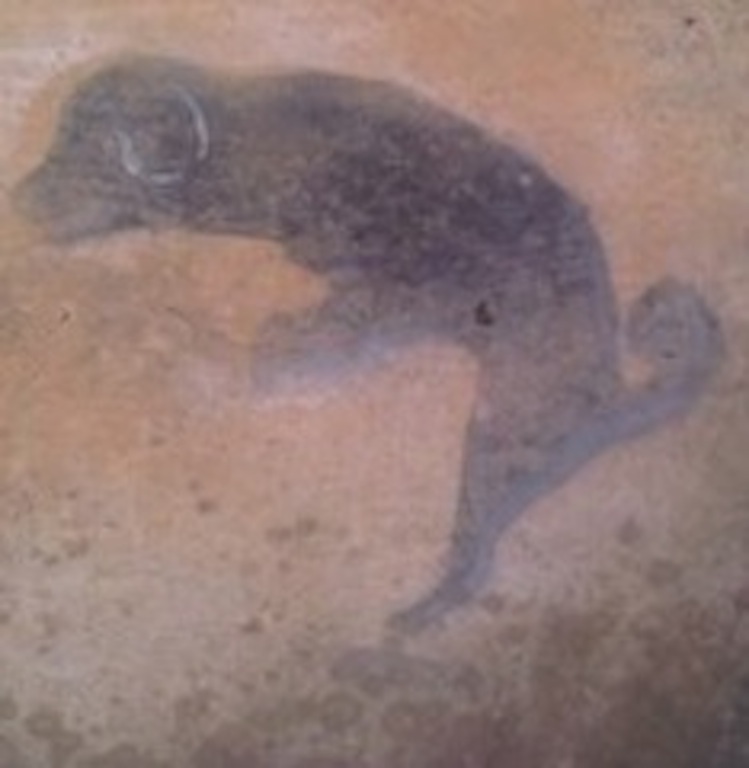 Dogs ran on two legs in those days it seems. They sort of shuffled real fast, hunched over like an old man, or a butler carrying a service tray. We’ve evolved since then. More feet on the ground equals faster run times. When will you humans ever learn? Somebody has to start the trend. Go ahead. You do it. Run like a dog.

For A Dog To Blog

As a dog, it ain’t easy to blog. I got a lot on my mind and I don’t always wanna share it, you know. And there are so many other things I’d rather be doing than writing words, things of importance such as eating and sleeping and smelling and relieving myself on a tree. Which is why I like to let The Dog Runner take over blogging sometimes.

But when I’m ready to do it, I do it. Still, to write a really good blog, as a dog or as a human, requires a lot. Here’s how the process works for me.

First I start thinking. And the very best way for anyone to start thinking is to put on a big pair of glasses. The bigger the better. It just makes those thoughts pour out. I’m thinking of so much. I can solve the Rubic’s cube and world hunger. But I can also come up with something fun to write about. The big glasses method usually works. 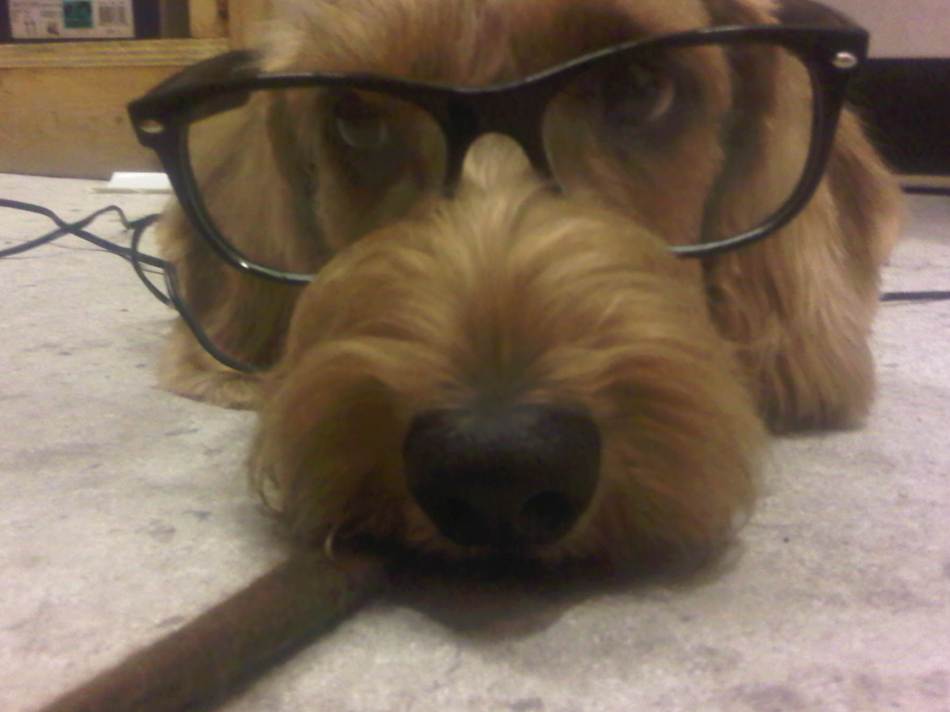 If big glasses method fails, I go out to Central Park and look at the little boats I hate so much. I bark at them and do some more thinking. And if something pops up, I try and make sense of it. Very transcendental this method. I call it the “waiting for the ship to come in method”. I’ll get an epiphany or two every so often. Floating out there somewhere upon the open waters is a great idea waiting to be had. When I grasp it I get to writing. 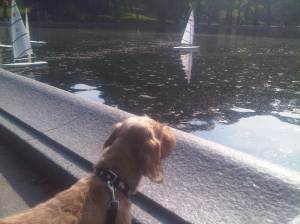 And if that doesn’t work, I’ll go to The Dog Runner’s running shoe store. I’ll go up to the shoe mirror and do some self-reflection. Think about myself. Think about what I want to say. “What have you been up to lately?” I ask Runderdog, which is me, but also not me because I’m asking my reflection. But my reflection is actually asking me the question as well. So I think is it me or the reflection asking? Maybe neither. And sometimes this works and sometimes it makes my head hurt and makes me cranky. I call this blog-storming method “the self-reflective inspirational and sometimes torture chamber caught in a circle mirror method”. 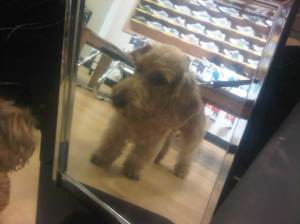 If none of these methods works for thinking of a blog, then a good night’s (or day’s) sleep surely will. In this method everything comes out perfect. I write beautiful works of art and sentences come out effortlessly. Often my legs twitch and then I start to run in my dreams. Running and writing. The perfect combo. It’s called “the dream run and write method”. 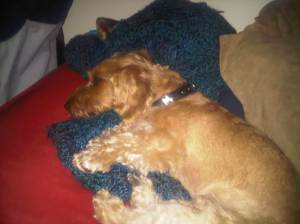 Ode to the Spirit of the Bulldog

Wine Dog just lounges around a wine shop. Occasionally he recommends a wine to someone. He’s only able to point out with his paw the bottles on the lower shelves. If he stares at the ceiling you’re just gonna have to pick a bottle on one of the higher shelves until he barks. Wine Dog is a bulldog and I’m convinced that’s why he’s working there. Bulldogs get all the cool jobs. I’m trying to figure out why. 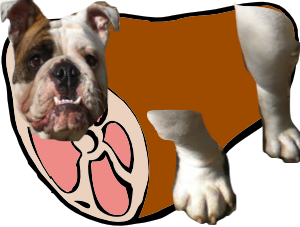 They look funny. They breathe funny. They have an underbite and snaggleteeth taken directly from some kind of medieval spike pit of doom. And then there’s that giant throw rug of a tongue. And what about all those facial wrinkles? If Joan Rivers had a worst nightmare, it would be turning into a bulldog. Plastic surgery? Oh gawd yes please! But I guess that’s part of the appeal. They’re a part of the ugly cute phenomenon. And that could be one reason why we see them everywhere. 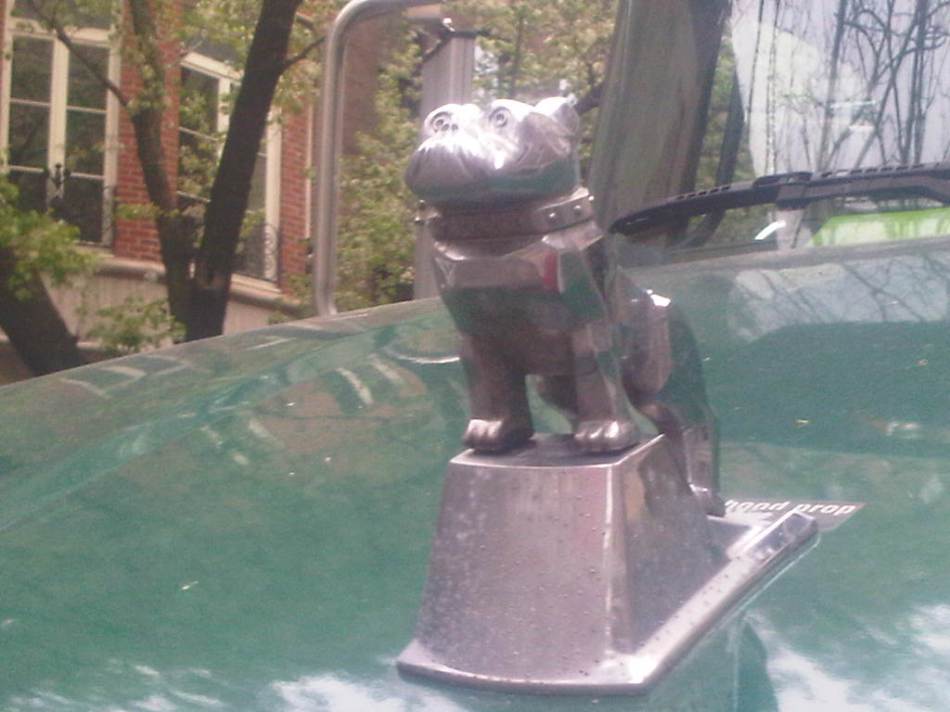 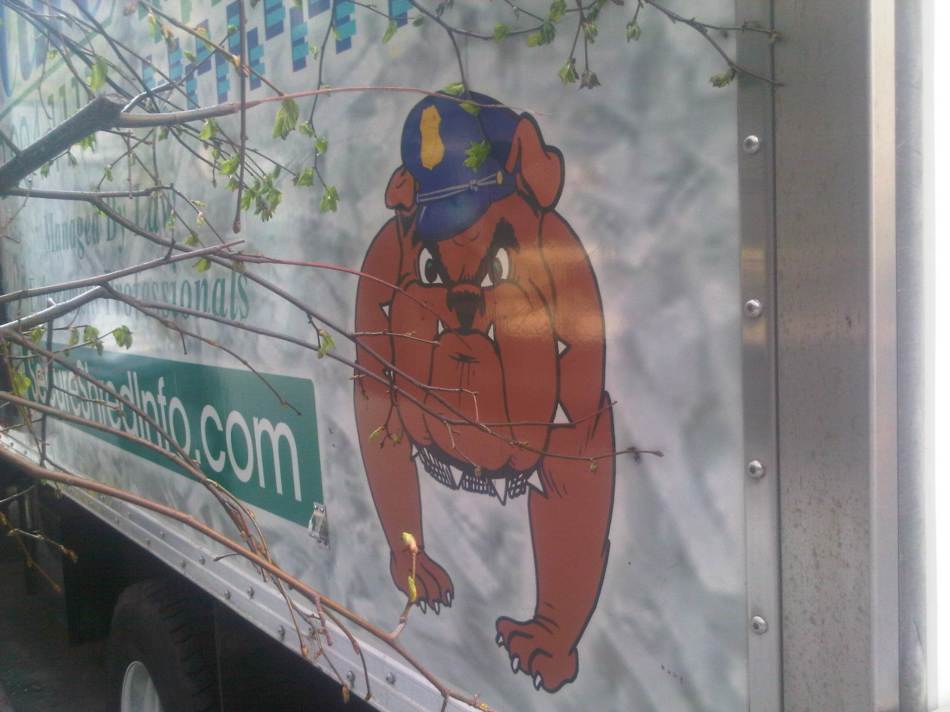 People even make cakes of bulldogs: 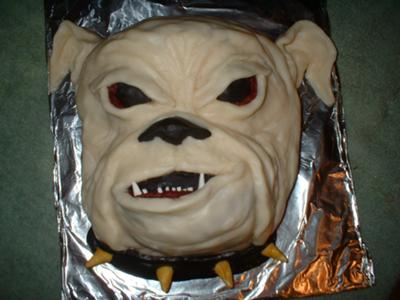 Yes, they’re everywhere. One could say they are the Lindsay Lohans and Charlie Sheens of dogs. But they’re better than that. They don’t do drugs or make up silly rants. Some of them do ride skateboards and even have their own tour buses: 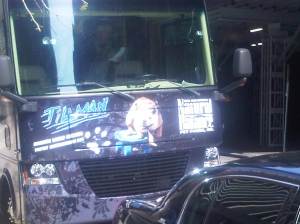 And some of them get great seats at football games: 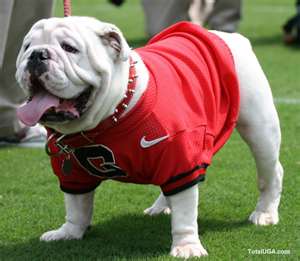 Uga is the mascot for University of Georgia. Following closely behind the eagle and the tiger, the bulldog is the third most popular college mascot. So, yeah, the number one dog mascot. And I believe they’re number one because there’s something unreal looking about them. They look like a cartoon. They look, well, like a mascot should look.

Americans have certainly been called stubborn. We’ve definitely been called lazy. Yes, we can be both of these. But these adjectives used to describe us usually come from those who do not truly know us. Good old fashioned American determination found cures for diseases like polio. And if we appear lazy, it is only because we are resting for something bigger. Yes, we are a lot like the bulldog. We get the job done. I would say we’re ugly cute. 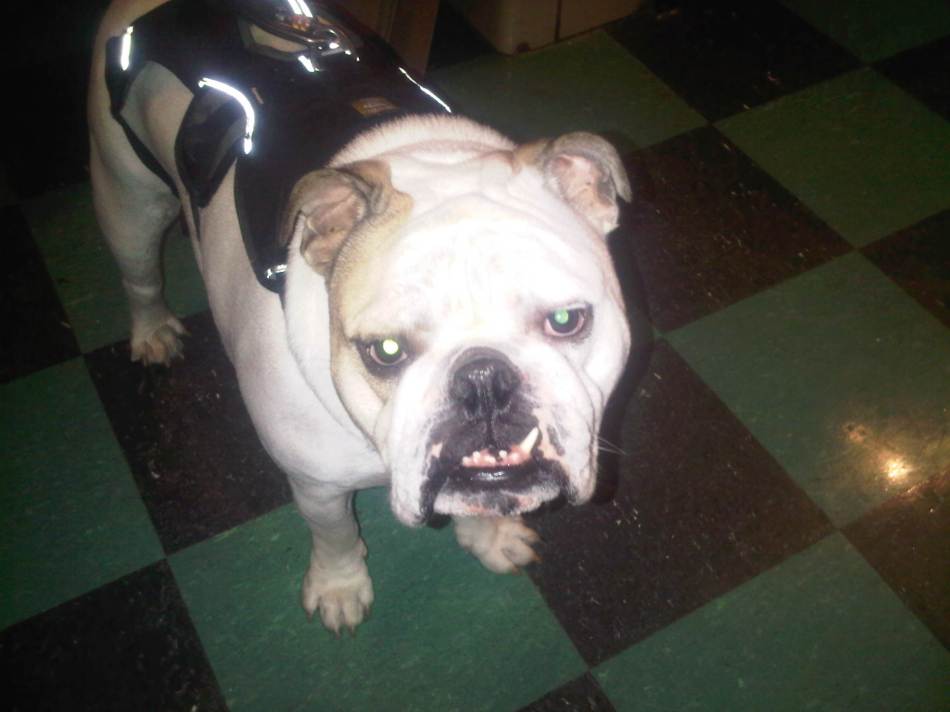 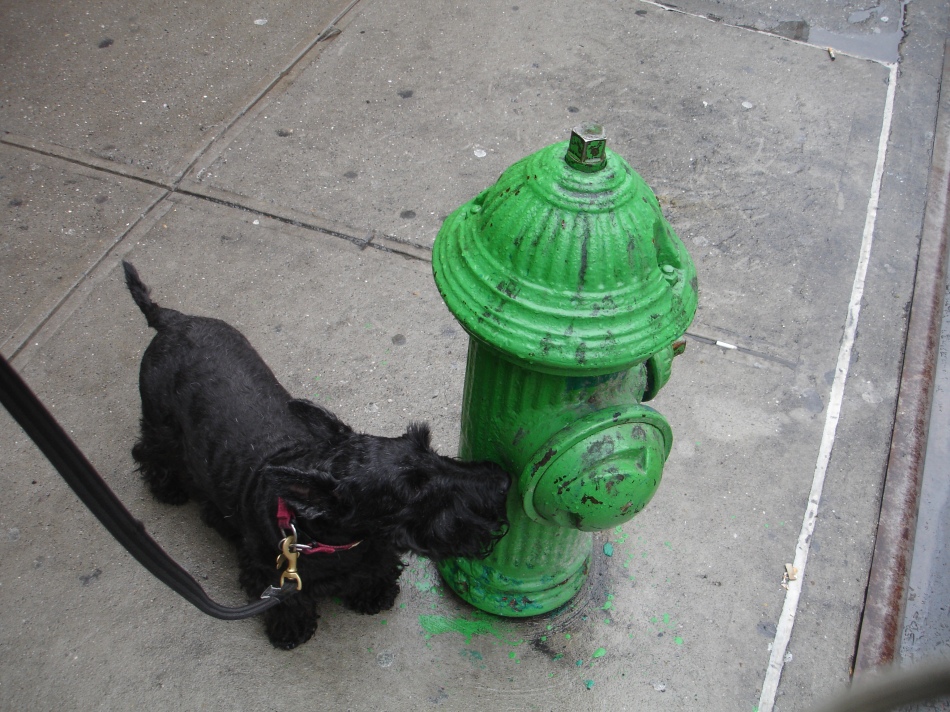 I'm just smelling the news and checking my pee-mail.

Elmo Gets Out of Jail

Elmo was released from jail today and seen back on the street. Sources say Big Bird bailed him out. He appears here more humbled by the experience and in need of money. If you see him (last seen by Runderdog on Park Ave. and 53rd), put a quarter in his red bag and tell him you hope he’s learned his lesson about being a showoff. Give Ernie and Kermit some airtime, dude. 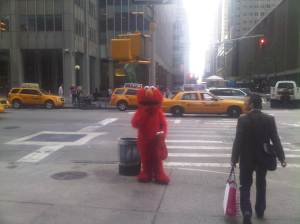 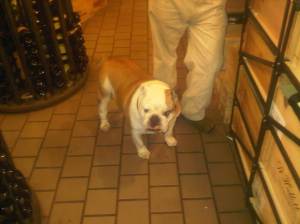 Bulldogs get all the cool jobs. Wine bulldog works in a wine shop on 54th and 2nd Ave. He guards against wine theft and wine stupidity. Mainly he sleeps in his bed by the door. This is a rare photo of him standing up in his guard pose. He currently recommends the ’08 Soter Vineyards Pinot Noir.